Bright eyed and bushy tailed, an eager team was ready to set off at 7.30am this morning to cover the 72 miles to Dartford.  A tricky ride today, as 30 miles in, with trepidation, the team hit the M25 without the main support vehicle (due to the aggravation of driving a van through central London at the weekend).

The ride to the Cenotaph was plagued with punctures which resulted in the first group arriving into central London some 30 minutes ahead of the second group, the teams were met with much interest from the tourists visiting the capital. 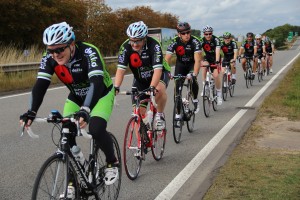 50 miles into the day, we hit the Serpentine.  As 2 groups of 7 and 8 riders, we then set off in procession along the Mall to Horse Guards Parade where the team was then lucky enough to take a very special break at the Cenotaph, in Whitehall, which has played host to the Remembrance Service for the past nine decades.  Emotions ran high as the team took time to reflect on the reason for the ride and all of the servicemen and women who have bravely lost their lives fighting for their country.  Special commemorative wreaths were laid by Gary Morton and Graeme Bailey on behalf of GM Fundraising and Gary Torr, Managing Director of headline sponsor Dekko Window Systems. 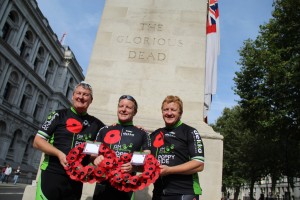 As the riders gathered to lay the wreaths and pose for pictures there were several war veterans also paying their respects who were pleased that the team had chosen to remember the fallen by doing the Poppy Ride.

It was a sight to behold as the team left the Cenotaph to cheers and applause from the crowds that had gathered to take photos and ask more about the ride.

The team arrived safely in Dartford this evening ready for some much needed refreshments and a good night’s rest, in order to break the halfway marker in the morning.

Dave Broxton gave a special dynamic to the evening presenting each member of the team with some personalised information on a selection of then fallen servicemen and women which included letters home and an account of how they lost their lives, a very real reminder of the debt of gratitude we owe them all.