As 9:30 struck on the morning of 20th June 2013 the teams entered into the GM Fundraising golf day started to register their potential winning four balls at the Telford Golf and country club under the watchful eye of Alison Marsh of Hope House and Alan Sadler of GM Fundraising. 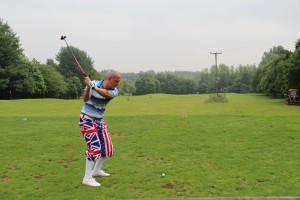 The weather was kind to us with no rain and a warm temperature which was raised by the stunning dress attire of Mike Wild from RBIG, if you have the guts to wear these trousers you had better be able to play, and I think the photo demonstrates he can.

After feeding and watering our intrepid teams it was time to focus on the putting, a nine hole completion where 2 is par, this was won in fine form with a score of -3 by Richard Williams from Ocean Swimming Pools.

Many of the teams were swinging the cobwebs away on the practice range, many for the first time since last year, and I reminded a couple not to leave their best shots on there, I can’t repeat their response on this blog as children may read it.

At the stroke of 11:38 the klaxon sounded and the completion began, shotgun style with all 18 teams teeing off simultaneously, which is a good system for getting everyone back at the same time and preventing a head start in the evenings re hydration event, not so good if you were on tee 14 which was a mile walk to and from the start and end, but as I said at registration “I am open to bribes.” 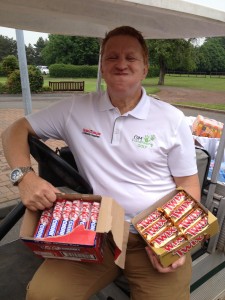 Next duty of the day was to get on the chocolate and drinks buggy with Gary Morton, anyone who knows Gary understands his weakness for all things chocolate and I had to explain to him just because he bought the chocolate doesn’t mean it is his alone, “it’s for the teams Mort” again I can’t print his reply but all I can report is that all the teams got their refreshments and Mort went home happy with the leftovers in his car.

Everyone we met during the tour of chocolate was having a good day, lots of banter and smiles from everyone which is the whole idea, we added some extra coaching on our tour some of which was well received,  but others where the tee shot could have been awarded with its own prize in the evening was not so happy with “another 8 like that and you will be on the green” comment from the GMF Chairman. 11th hole was beat the Pro where 5 individuals actually got closer to the pin than the club pro, the prize for this wonderful achievement was thirty five English pounds from a £5 stake, in true style at the evening presentation Mr Morton offered congratulations to the famous five and invited them to come and collect the winnings and also reminding them that by accepting the prize money they would also be reducing the amount raised, an example of extortion at its finest and thanks to the winners for their generosity.

Nearest the pin on  was won by a wonderful tee shot by Mr Gary Torr from Dekko Windows who admitted later he topped it then hit 2 trees to land 2 feet from the pin.

Longest drive on 18 was won by Dave Haley from Electric Systems with a missive strike, he said afterwards “imagine how far it would have gone if I had used a driver” !

With all the teams finished and after a few cheeky beers and a quick shower and change it was time for the usual “if only” pre dinner drinks session kindly sponsored by Promac, so thank you David and Joe for this and your ongoing support as always. 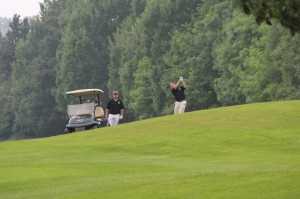 Following a great meal from the ever professional staff at Telford Golf and Country Club it was time for the raffle and auction events, it never ceases to amaze us the generosity of our friends and supporters and this occasion was no exception, the reason GM Fundraising continues to be successful is because of this support, for this we are continually overwhelmed and grateful.

Mr Morton got so engrossed by the fundraising he, for the second year, forgot the golf prize giving, kindly manufactured and donated by Bohle UK, thanks Dave Broxton.

First up was best individual, runner up with 41 pts was Lee Tilley from Patterson & Rothwell. The winner with a stunning 42 pts playing off 28 was Nick Leese from Haffner.

Nick proudly Walked to the front with a swagger looking at the room of his fellow competitions who he had taken to the cleaners, after few photos and punching the air he returned to his seat.

Next prize “Doggy handicap award” Nick Leese was invited back to collect his prize echoed with roars from the crowd and fair play to him pouched to the air with the same excitement as his best individual award, remember at GMF Golf there is always a hidden twist.

The wooden spoon for the lowest individual score was Alan Duffield of Quickslide he said he would have got more but he only played 18.

Next up was best team, a closely fought battle with Promac who are always strong finishing in 3rd place with 90 pts, 1st place was tied with 92 pts between Ocean Swimming Pools and Haffner with Ocean emerging as winners following a 4 pt lead on count back. 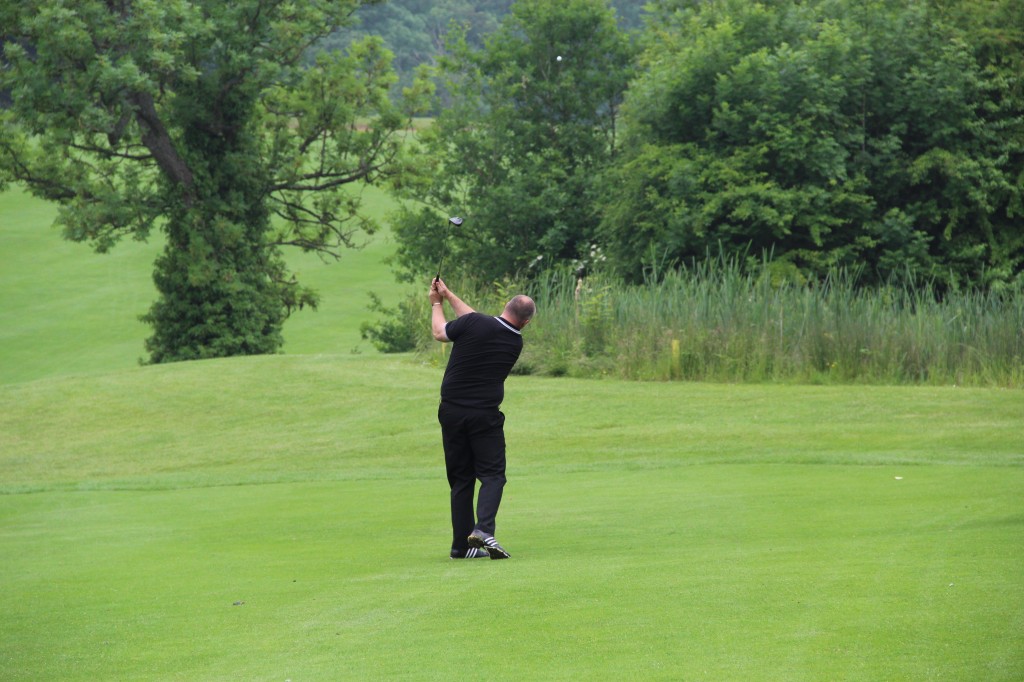 The final prize was the Wooden Spoon for the team who finished last and this year the worthy winners were Solidor with 72pts making up the team, Matthew Glover of Fitshow Events was so chuffed he had finally won a golf trophy was very active on the interweb with his prize, only to be reminded it was for the lowest scoring team, but as he said “a trophy is a trophy” so well done to Solidor for entering into the spirit of the prize.

All that was left was to continue with the re hydration event in the hotel bar and reflect on our days challenges and achievements, we enquired to Dave and Joe if Promac would also sponsor this part of the evening but again I can’t print the response.

The total raised was a massive £8828.50 for which we thank all the teams, their sponsors and the generous folk of the raffle and auction.

The GMF team’s attention now moves to our next challenge of the 2616 mile cycle ride down the iconic Route 66 for Hope House which is aptly labelled Hope66, keep your eye on the blog, twitter, Facebook and YouTube for updates and sponsor any of the team at https://www.justgiving.com/teams/hope66

Thanks again and FORE