With many, many miles, deserts, hills and mountains covered, the GM Fundraising Border2Border team, proudly sponsored by Deceuninck, have completed the epic challenge of cycling from Canada to Mexico.  And it is fair to say the challenge, dubbed as ‘The Toughest Yet’ has most definitely lived up to its name!

“I struggle to find the words to explain how difficult it was,” comments Gary Morton, founder of GM Fundraising and a rider in this year’s B2B challenge. “Brutal, was one widely used by almost every rider.  The early part of the ride saw heavy rain, thunderstorms, snow and hail storms with temperatures around 7 degrees.  One of the hardest days, unexpectedly, was on Day 2 riding from Monroe into ‘Yakama, Washington State.  Team one had to climb 5,400ft, more than half of which was in the last 8 miles, through pouring rain and a strong head wind – it felt like the worst hour of any ride I have ever done, both physically and mentally.  The winds on Day 3 saw us pedalling our hearts out downhill where there would normally be some reprieve.  The views from Crater Lake were stunning, but it was so cold no one could stop for very long to take them in.

“This quickly changed though as we ascended on to the Columbian Plateau and into the desert – acclimatising to this was really difficult.  The high temperatures meant early starts to avoid the +45 degree highs; gruelling runs through deserts which nearly set your feet on fire, and an astonishing amount of feet climbed in one day – 12,994ft over the Santa Rosa Mountains into Borrego Springs on day 10 to be precise.

“We also made a detour to the meet our sponsors Deceuninck at their new plant in Fernley, Nevada.  We were joined by a special guest, Fillip Geerhert, the CEO of Deceuninck USA, who joined the 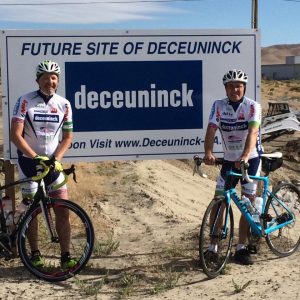 team to make the journey into the plant.”  Roy Frost, Managing Director of Deceuninck UK adds: “It was great to see the rapid progress on our new factory in Reno, Nevada. Filip told me that the walls went up only last week and the new silos were installed the day before we arrived. It’s open for business in August and in the evening we met the new management team and wished them all the best in their new exciting venture.”

Gary continues: “The varying weather conditions certainly added to the enormity of this already epic challenge but it hasn’t been all bad!  Some of the scenery was spectacular, the laughs have been many and the team spirit soared throughout.  Our Hope House Mascots, Poppy, Harley and Kyle gave us daily reminders of who we were doing this for and the whole team pulled together to get each other through to the end.  The personal sense of achievement from everyone taking part will never be forgotten and is so very well deserved.

“I must also pay tribute to the support team who were amazing – they coped with every situation, putting in extra hours before and after the rider’s day to make sure everything was in-hand.  They provided a continuous supply of food and gallons of water – Almost 250 gallons in fact – first aid, therapy (both mental and physical) and found bike repair shops to mend the mechanical issues we encountered.  They were also responsible for some of the stunning photography posted on social media.

“The end of the ride saw us cycle, as a complete team, into The Border Field State Park and was followed by an end of ride party hosted by Alan Reece and Kevin Harvey of Panoramic Doors, who have operations in both the US and UK. It was a wonderful gesture and a fantastic way to end the ride. Their generosity didn’t stop at the party as they also donated $3,000 to the B2B fund.

“Thank you to everyone that has supported us throughout – and not just from GM Fundraising and the Border2Border team, but from all the children, families and staff at Hope House.

“We will be announcing the grand total soon but in the meantime you can still support the team through our just giving page https://www.justgiving.com/teams/GMFB2B”